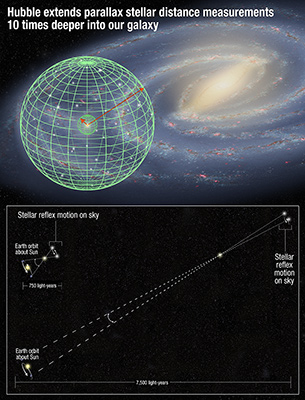 APRIL 10, 2014: Astronomers continue refining the precision of distance measurement techniques to better understand the dimensions of the universe. Calculating the age of the universe, its expansion rate, and the nature of dark energy all depend on the precise distance measurements to stars and galaxies. If the astronomical yardsticks are off, the astronomical interpretation may be flawed. The most reliable method for making astronomical distance measurements is to use straightforward geometry where the 186-million-mile diameter of Earth’s orbit is used to construct a baseline of a triangle, much as a land surveyor would use. If a target star is close enough, it will appear to zigzag on the sky during the year as a reflection of Earth’s orbit about the Sun. This technique is called parallax. The stars are so far away that the angle of this parallax shift is incredibly tiny. An innovative new observing technique has extended Hubble’s yardstick 10 times farther into our galaxy, out to a distance of 7,500 light-years from Earth.

Even though NASA’s Hubble Space Telescope is 24 years old, astronomers are still coming up with imaginative, novel, and groundbreaking new uses for it. The latest is an innovative technique that improves Hubble’s observing accuracy to the point where rock-solid distance measurements can be made to Milky Way stars 10 times farther away than ever accomplished before.

To do this, Hubble observations and subsequent analysis were fine-tuned to make angular measurements (needed for estimating distances) that are so fine that if your eyes had a similar capability you could read a car’s license plate located as far away as the Moon!

This new capability allows astronomers to use even more distant stars as yardsticks to refine estimates. In addition, it is expected to yield new insight into the nature of dark energy, a mysterious component of space that is pushing the universe apart at an ever-faster rate.

As proof of concept for this new long-range precision, Hubble was used to measure the distance to a bright star of a special class (called Cepheid variables) that is located approximately 7,500 light-years away in the northern constellation Auriga. The technique worked so well that additional Hubble distance measurements to other far-flung Cepheids are being measured.

Such measurements will be used to provide firmer footing for the so-called cosmic “distance ladder.” This ladder’s “bottom rung” is built on measurements to Cepheid variable stars that, because of their known intrinsic brightnesses, have been used for more that a century to gauge the size of the observable universe. They are the first step in calibrating far-more-distant intergalactic milepost markers, such as Type Ia supernovae.

The most reliable method for making astronomical distance measurements is to use straightforward geometry where the 186-million-mile diameter of Earth’s orbit is used to construct a baseline of a triangle, much as a land surveyor would use. If a target star is close enough, it will appear to zigzag on the sky during the year as a reflection of Earth’s orbit about the Sun. This technique is called parallax.

Astronomical parallax works reliably for stars within a few hundred light-years of Earth. For example, the position of the nearest star system to our Sun, Alpha Centauri, varies due to parallax by only one arc second on the sky during the year, which is equal to the apparent width of a dime seen from two miles away.

But the farther away the star, the smaller the angle of its apparent back-and-forth motion, until the offset is so small it can barely be measured. Astronomers have pushed to make ever smaller angular measurements to extend the parallax yardstick ever deeper into our galaxy.

Noble Laureate Adam Riess of the Space Telescope Science Institute (STScI) and the Johns Hopkins University in Baltimore, Md., in collaboration with Stefano Casertano of STScI, developed an ingenious technique to use Hubble to make measurements as fine as five-billionths of a degree on the sky. (A degree is twice the angular width of the full moon.)

Riess imagined that if Hubble could take numerous exposures of a target star quickly, he could combine the data to measure extremely small angles on the sky. But rather than taking multiple exposures, Riess had the stars trail across Hubble’s imaging detector to leave linear streaks. Riess says that he got the idea for how to do the observation while swimming laps in lanes that are long, linear swaths, like the stellar images streaked across the detector. Infinitesimal offsets in the streaks that could be caused by parallax were measured through new image analysis techniques developed by Casertano and Riess.

To make a distance measurement, exposures of the target Cepheid star were taken every six months, when Earth is on opposite sides of the Sun. A very subtle shift in the Cepheid’s position was measured to an accuracy of 1/1000 the width of a single picture element (pixel) in Hubble’s Wide Field Camera 3 (which has 16.8 megapixels total). A third exposure was taken 12 months after the first observation to allow for the team to subtract the effects of the subtle space motion of stars, with additional exposures used to remove other sources of error.

Riess shares the 2011 Nobel Prize in Physics with another team for his leadership in the 1998 discovery that the expansion rate of the universe is accelerating, a phenomenon widely attributed to a mysterious, unexplained “dark energy” filling the universe. His goal is to refine estimates for the universe’s expansion rate to the point where dark energy can be better characterized.