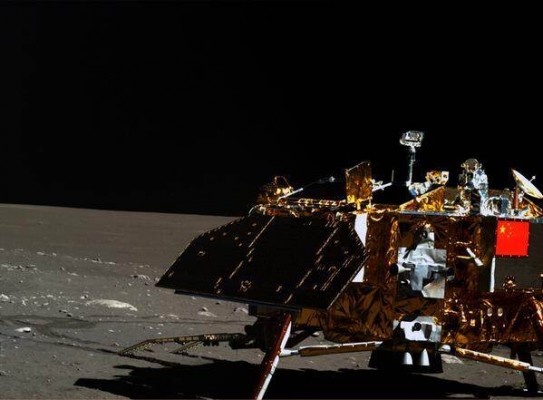 This image if the Chang’e 3 lander was published by the China Saturday. “Yutu snaps Chang’e-3 before its 3rd dormancy,” Xinhua reported. “Mechanical issues remain unresolved.”

China;s plucky little Jade Rabbit may not be hopping along any more but it is still alive. After the extremely successful landing and deployment of the Jade Rabbit Rover China experienced technical issues. While they attempted to configure the rover for a planned two-week sleep period, doors designed to keep it warm would not close. When the lunar night occurs the probe needs to cover up so that it can stay warm during the bitter cold two-week period. The first time they attempted to close the rover up there were unspecified mechanical issues. Even the closed mouth China Space Agency stated they were not sure the plucky little rover would survive.

Once the warmth of day again arrived the rover had survived but still had mechanical issues. In addition to continued problems in configuring for the sleep periods the rover could no longer move. The mission has now entered the third two-week sleep period. They have reported that once again the rover cannot be configured properly. This will once again expose the rover to the extreme cold of space, possibly damaging the sensitive electronics further.

News from China can be hard to come by but they did report the rover carried out scientific measurements from it’s stationary position. The rover was designed to last three months while the lander is expected to survive for a year. Landing on the moon is a significant accomplishment, this setback while serious will still allow them to learn and improve designs for future missions. There is speculation that lunar dust hampered the mechanics of the rover and that is the root cause of the failure.