(NASA) Swift’s seven-year campaign to monitor the center of the Milky Way has doubled the number of images available to scientists of bright X-ray flares occurring at the galaxy’s central black hole, dubbed Sagittarius A* (Sgr A*).

Sgr A* sits in the center of the Milky Way’s innermost region, 26,000 light-years away in the direction of the constellation Sagittarius. Its mass is at least 4 million times that of the sun. Despite its considerable size, it is not nearly as bright as it could be if it was more active, according to one expert.

“Given its size, this supermassive black hole is about a billion times fainter than it could be,” said Nathalie Degenaar, principal investigator on the Swift galactic center campaign and an astronomer at the University of Michigan in Ann Arbor. “Though it’s sedate now, it was quite active in the past and still regularly produces brief X-ray flares today.”

To better understand the black hole’s behavior over time, the Swift team began making regular observations of the Milky Way’s center in February 2006. Every few days, the Swift spacecraft turns toward the innermost region of the galaxy and takes a 17-minute-long snapshot with its X-ray Telescope (XRT). 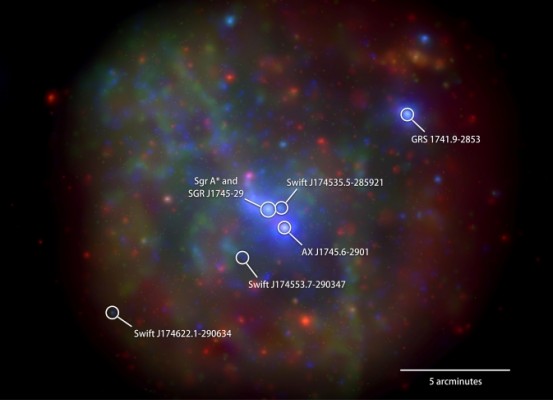