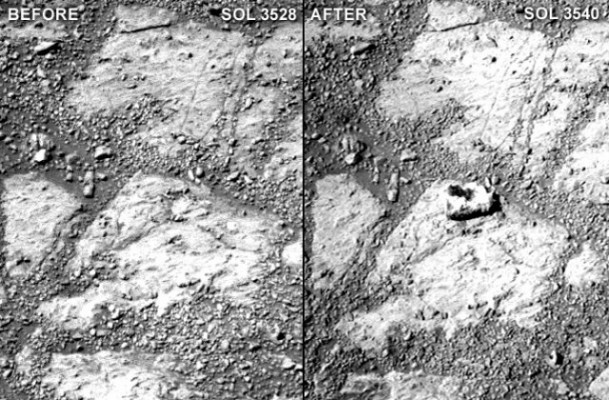 Mars “Doughnut Rock” Appears out of no where.
Credit NASA/JPL

In this side by side image you can easily see the doughnut shaped rock that appeared on Mars.. The pictures were taken 12 days apart of the same area. The oldest active Mars Rover Opportunity discovered this most unusual find. The size of the rock is also about the size of a doughnut.

NASA issued a Mars rover status report entitled “encountering a surprise”. Mars Exploration rover scientist Steve Squyres of Cornell University stated “We saw this rock just sitting here. It looks white around the edge in the middle and there’s a low spot in the center that’s dark red – it looks like a jelly doughnut.”.,,,,,“And it appeared, just plain appeared at that spot – and we haven’t ever driven over that spot.”

“We had driven a meter or two away from here, and I think the idea that somehow we mysteriously flicked it with a wheel is the best explanation,” Squyres said. The other possibility is that the rock is part of ejecta from a meteorite impact but this is very unlikely.

A rock being flicked by the rovers wheel seems like a simple enough explanation but there are some other oddities.  “We’ve taken pictures of both the doughnut and jelly parts, and the got the first data on the composition of the jelly” stated Squyres “It’s like nothing we’ve ever seen before,” …. “It’s very high in sulphur, it’s very high in magnesium, it’s got twice as much manganese as we’ve ever seen in anything on Mars.”

“I don’t know what any of this means. We’re completely confused, and everyone in the team is arguing and fighting (over what it means).”

“That’s the beauty of this mission… what I’ve realized is that we will never be finished. There will always be something tantalizing, something wonderful just beyond our reach that we didn’t quite get to – and that’s the nature of exploration.”