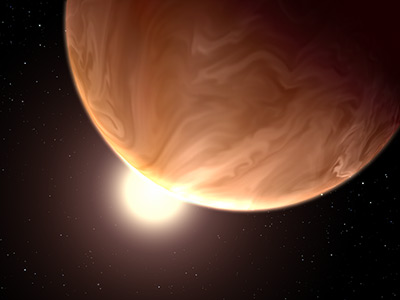 This is an illustration of the hypothetical appearance of the exoplanet GJ 1214b, which is known as a “super-Earth” type planet because it is slightly more than six Earth masses. Spectroscopic observations with NASA’s Hubble Space Telescope provide evidence of high clouds blanketing the planet. These clouds hide any information about the composition and behavior of the world’s lower atmosphere and surface. The composition of the clouds is unknown. GJ1214b is located 40 light-years from Earth, in the constellation Ophiuchus.
Artwork Credit: NASA, ESA, and G. Bacon (STScI)

(NASA) – Scientists using NASA’s Hubble Space Telescope have characterized the atmospheres of two of the most common type of planets in the Milky Way galaxy and found both may be blanketed with clouds.

The planets are GJ 436b, located 36 light-years from Earth in the constellation Leo, and GJ 1214b, 40 light-years away in the constellation Ophiuchus. Despite numerous efforts, the nature of the atmospheres surrounding these planets had eluded definitive characterization until now. The researchers described their work as an important milestone on the road to characterizing potentially habitable, Earth-like worlds beyond the solar system. Their findings appear in separate papers in the Jan. 2 issue of the journal Nature.

The two planets fall in the middle range in mass, between smaller, rockier planets such as Earth and larger gas giants such as Jupiter. GJ 436b is categorized as a “warm Neptune” because it is much closer to its star than frigid Neptune is to the sun. GJ 1214b is known as a “super-Earth” because of its size. Both GJ 436b and GJ 1214b can be observed transiting, or passing in front of, their parent stars. This provides an opportunity to study these planets in more detail as starlight filters through their atmospheres.

One of the papers presents an atmospheric study of GJ 436b based on such transit observations with Hubble, led by Heather Knutson of the California Institute of Technology in Pasadena, Calif. The Hubble spectra were featureless and revealed no chemical fingerprints whatsoever in GJ 436b’s atmosphere.

“Either this planet has a high cloud layer obscuring the view, or it has a cloud-free atmosphere that is deficient in hydrogen, which would make it very unlike Neptune,” said Knutson. “Instead of hydrogen, it could have relatively large amounts of heavier molecules such as water vapor, carbon monoxide, and carbon dioxide, which would compress the atmosphere and make it hard for us to detect any chemical signatures.”

Observations similar to those obtained for GJ 436b had been obtained previously for GJ 1214b. The first spectra of this planet also were featureless, but indicated GJ 1214b’s atmosphere was dominated by water vapor or hydrogen, with high-altitude clouds.

Using Hubble, astronomers led by Laura Kreidberg and Jacob Bean of the University of Chicago took a closer look at GJ 1214b. They found what they consider definitive evidence of high clouds blanketing the planet and hiding information about the composition and behavior of the lower atmosphere and surface. The new Hubble spectra also revealed no chemical fingerprints in GJ 1214b’s atmosphere, but the data were so precise they could rule out cloud-free compositions of water vapor, methane, nitrogen, carbon monoxide, or carbon dioxide for the first time.

“Both planets are telling us something about the diversity of planet types that occur outside of our own solar system; in this case we are discovering we may not know them as well as we thought,” said Knutson. “We’d really like to determine the size at which these planets transition from looking like mini-gas giants to something more like a water world or a rocky, scaled-up version of the Earth. Both of these observations are fundamentally trying to answer that question.”