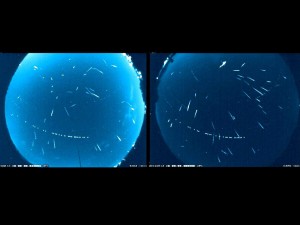 Tonight is the peak of the 2013 Perseids Meteor Shower, with predicted rates of up to 100 per hour. Perseids may be seen any time after dark, but rates increase throughout the night, peaking between 3-5 a.m. (your local time) on the morning of Monday, Aug. 12. The Perseids, is the most popular meteor shower of the year,
The meteor shower radiates from the constellation Perseus, which rises in the northeast after sunset.
Just follow the Milky Way from the south to the north to find it. You’ll see some Perseids all month long, before and after midnight. The greatest number of meteors after midnight on Sunday and Monday mornings on either side of the shower’s peak.

Below is a live broadcast of the skies over Marshall Space Flight Center in Huntsville, Ala. The Perseid meteor shower has started, peaking on the night of Aug. 11-12. The live feed is an alternative for stargazers caught with bad weather or light-polluted night skies. The camera activates at full dusk (approx. 9 p.m. EDT). During the day you will either see a dark gray box or pre-recorded footage.