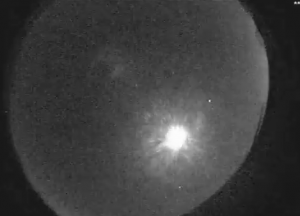 The December 2012 Geminid shower  produced 50 or more meteors per hour. One of two major showers per year it’s either the August Perseids or the December Geminids that give us the most spectacular display of the year. The Geminid meteor shower of 2012 was one that many will remember.

Flaring brighter than the full moon, this spectacular Geminid lit up the sky above Cartersville, Ga., at 2:29 a.m. EST on the morning of Dec. 14. This is one of the brightest fireballs observed by the NASA network of meteor cameras in over 4 years of operation. (NASA/MSFC/MEO)