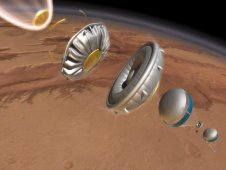 As NASA plans ambitious new robotic missions to Mars, laying the groundwork for even more complex human science expeditions to come, the spacecraft needed to land safely on the red planet’s surface necessarily becomes increasingly massive, hauling larger payloads to accommodate extended stays on the Martian surface. NASA has used its current, parachute-based deceleration system since the Viking Program, which put two landers on Mars in 1977. New technology is needed to slow larger, heavier landers from the supersonic speeds of atmospheric entry to subsonic ground-approach speeds.

NASA seeks to use atmospheric drag as a solution, saving rocket engines and fuel for final maneuvers and landing procedures. The heavier planetary landers of tomorrow, however, will require much larger drag devices than any now in use to slow them down — and those next-generation drag devices will need to be deployed at higher supersonic speeds to safely land vehicle, crew and cargo. NASA’s Low Density Supersonic Decelerator (LDSD) Technology Demonstration Mission, led by NASA’s NASA’s Jet Propulsion Laboratory in Pasadena, Calif., will conduct full-scale, stratospheric tests of these breakthrough technologies high above Earth to prove their value for future missions to Mars.

Video of rocket-sled testing of the SIAD-R device, conducted in fall 2012 at China Lake, Calif. The SIAD-R is one of three supersonic deceleration devices now being prepared for flight testing by the Low-Density Supersonic Decelerator project at NASA’s Jet Propulsion Laboratory in Pasadena, Calif. The devices, which slow the rate of descent for vehicles entering the atmosphere of another planet, could be used in Mars missions launching as early as 2018.