What would you say after we discovered intelligent life exists on another planet? 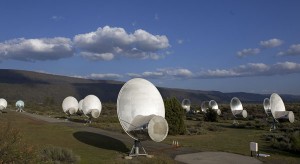 Every day were closer to finding an intelligent species outside our solar system, let us know what you would have to say once that happened. Kepler and other observatories find planets on almost a daily basis now. Were finding Earth sized planets and planets in that magical habitable zone which supports life. Earthlings and programs like SETI, the Search for Extra Terrestrial Intelligence,  are not just randomly searching the sky for radio signals any longer. We now can narrow the focus to place we know have planets, and not only that, planets that have a chance to support life. If it is out there we will find it, hopefully sooner rather than later.  What would you have to say to your fellow Earthlings, to the aliens once that happened. We want you to tell us here.

This is the scenario for our experiment.  SETI has discovered a radio signal emanating from our closest neighbor Alpha Centauri. As you may have read here on KnowledgeOrb scientists have just discovered an Earth sized planet there. This signal, although weak has been confirmed by other ground based receivers all over the Earth to be real. We have not managed to decode the contents of the signal yet but it is definitely a carrier wave and not of natural origin. The intent would be to try and decode the signal and start a conversation. Being as Alpha Centauri is only 4.4 light years away there is a real possibility of a two way information exchange.

What would you say to your fellow Earthlings, or to this new species once we found them? Take part in our little experiment here and leave a posting with your words of wisdom, comedy or anything in between.

4 thoughts on “What would you say after we discovered intelligent life exists on another planet?”