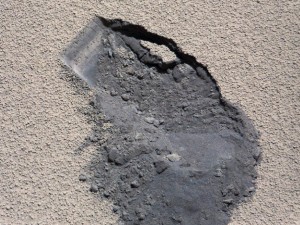 In this close up of scoop one from MSL you can see some interesting things about the soil at this site. If you look closely on the right you can see a crust that was in effect broken when the probe penetrated the top of the soil. It appears that there is a thin layer if harder material on the surface that has enough strength a piece of it remained as a solid piece. If you look at the smoother part of the darker soil that was dug out at the top of the picture you can see there is layering or stratification of the soil layers. These layers were deposited just as they are here on earth and the lighter color could have been deposited during a sand storm or other event. Analysis of the soil data has since shown the sample is similar to some of the volcanic soils on Earth in Hawaii. This is a close up from the first scoop taken from the “Rocknest” patch of dust and sand on Oct. 7, 2012, the 61st sol. The image was taken by Curiosity’s Mast Camera. Scientists enhanced the color is show the Martian scene as it would appear under lighting conditions on Earth.