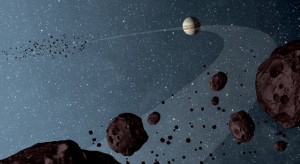 Wide-field Infrared Explorer  reveals that the Jovian Trojans asteroids are uniformly dark with a hint of burgundy color, and have matte surfaces that reflect little sunlight.

There is a group of asteroids that orbit the Sun in the same path as Jupiter. These asteroids, known as Trojan’s, have not been closely observed to understand what they look like until now.  There are two groups of these asteroids that tend to clump together. One leads Jupiter and the other follows.  While it is not know where these groups of asteroids came from the new data offers clues. Both of these groups are very similar. They Kepler belt and objects in the belt between Mars and Jupiter are different than these Trojans. “Jupiter and Saturn are in calm, stable orbits today, but in their past, they rumbled around and disrupted any asteroids that were in orbit with these planets,” said Tommy Grav, a WISE scientist from the Planetary Science Institute in Tucson, Ariz. “Later, Jupiter re-captured the Trojan asteroids, but we don’t know where they came from. Our results suggest they may have been captured locally. If so, that’s exciting because it means these asteroids could be made of primordial material from this particular part of the solar system, something we don’t know much about.”

“By obtaining accurate diameter and surface reflectivity measurements on 1,750 Jupiter Trojans, we increased by an order of magnitude what we knew about these two gatherings of asteroids,” said Grav. “With this information, we were able to more accurately than ever confirm there are indeed almost 40 percent more objects in the leading cloud.”