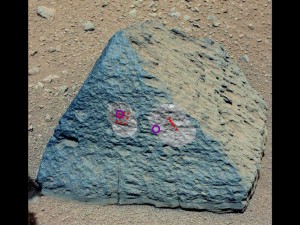 Target: Jake Matijevic Rock
This image shows where NASA’s Curiosity rover aimed two different instruments to study a rock known as “Jake Matijevic.” The red dots are where the Chemistry and Camera (ChemCam) instrument zapped it with its laser on Sept. 21, 2012, and Sept. 24, 2012, which were the 45th and 48th sol, or Martian day of operations. The circular black and white images were taken by ChemCam to look for the pits produced by the laser. The purple circles indicate where the Alpha Particle X-ray Spectrometer trained its view.
This image was obtained by Curiosity’s Mast Camera on Sept. 22, 2012, or sol 46.
Image credit: NASA/JPL-Caltech/MSSS

The rock know as Jake Matigevic  (matt-EE-oh-vick) shows signs similar to rocks on Earth formed volcanic rocks found formed in the presence of water. Edward Stolper of the California Institute of Technology in Pasadena, who is a Curiosity co-investigator stated “This rock is a close match in chemical composition to an unusual but well-known type of igneous rock found in many volcanic provinces on Earth,…With only one Martian rock of this type, it is difficult to know whether the same processes were involved, but it is a reasonable place to start thinking about its origin.”

On Earth this kind of rock is formed deep in the crust in the presence of water. This was the first rock analysed by the rover’s arm-mounted Alpha Particle X-Ray Spectrometer (APXS). You may remember this instrument from other mars lander missions. Jake is high in elements consistent with the mineral feldspar, and low in magnesium and iron.

This is the first of many findings from new Curiosity rover, there is still 5 years of science data in front of us from this increadable machine. We can only guess at what we will learn.