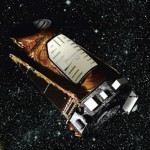 The Kepler Satellite, known for many discoveries of planets outside of our solar system, has experienced the failure of one of it’s four reaction wheels which keep it pointed for these observations. Reaction Wheel #2 (RWA) has been turned off leaving the three remaining wheels to control the X,Y,Z axis of the observatory. Full control can be maintained with these three wheels. The Kepler team completed another monthly science data download over July 29-30, 2012. The Quarter 13 Month 2 data downlink was interrupted by the pointing error anomaly that Kepler experienced from July 14, 2012 through July 19, 2012. The anomaly was detected during a routine semi-weekly contact with the spacecraft on July 16, 2012.

Initial assessment shows that the anomaly appears to be isolated to reaction wheel #2. The RWA consists of four reaction wheels mounted on non-orthogonal axes. The wheels are actively redundant. This means that all four wheels share the load for momentum management and attitude control of the spacecraft. The spacecraft design is tolerant to the failure of a reaction wheel and can meet all mission objectives operating with three wheels.