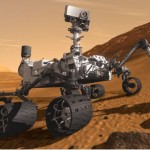 Excitement builds as the latest Mars Rover Curiosity is due to land on Mars at 1:31 a.m., EDT on Monday, Aug. 6. You can watch the landing live on NASA TV by clicking HERE. Also the regular NASA TV on cable if you have it as well as the Weather Channel starts coverage at 11:00pm eastern. The landing will follow what is lovingly called the 7 minutes of terror in which the rover will slow from over 13,000 mph to a soft rocket assisted landing on the surface of mars. You can read more about this complex landing sequence HERE and see the video of it.

This exciting mission is the latest in a series of rovers that NASA has sent to Mars. At a cost of 2.5  billion dollars it is also the most expensive and complex. The size of  a small mini van this is the largest rover ever to land on mars. If you think the rover is worth the cost or not you cannot help but get a little excited at the thought of mankind placing vehicle on the surface of another planet.

.Curiosity remains in good health with all systems operating as expected. Saturday, the flight team uplinked and confirmed commands to make minor corrections to the spacecraft’s navigation reference point parameters. In addition as part of the onboard sequence of autonomous activities leading to the landing, catalyst bed heaters are being turned on to prepare the eight Mars Lander Engines that are part of MSL’s descent propulsion system. As of 2:25 p.m. PDT (5:25 p.m. EDT) Saturday, MSL was approximately 261,000 miles (420,039 kilometers) from Mars, closing in at a little more than 8,000 mph (about 3,600 meters per second).

If you plan to watch be there a little early as the NASA TV web site might get a bit busy and you could miss your chance. The chance to see history in the making like this does not come often and should not be missed!