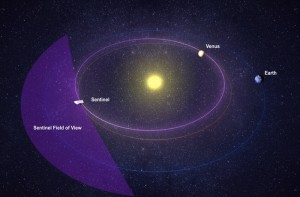 The goal of a newly announced private space telescope may be protecting Earth, but the instrument could also help out prospective asteroid miners.

“We will provide the accurate orbit determinations so that you know where to point your other telescopes,” former astronaut Ed Lu, B612’s chairman and CEO, told reporters at Sentinel’s official unveiling on June 28. “We will get a handle on the sizes of the asteroids, which is critical.”

“When Sentinel is done, it will have catalogued roughly half a million asteroids,” Lu said. “It will be the definitive map of the inner solar system.”

“We’re primarily an astrometric mission. That is, we’re mapping something,” said B612 chairman emeritus Rusty Schweickart, who was the lunar module pilot on NASA’s Apollo 9 mission. “We’re not doing the kind of detailed spectrographic work that would be required for actual resource exploitation.”