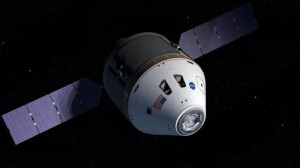 CAPE CANAVERAL, Fla. — More than 450 guests at NASA’s Kennedy Space Center in Florida welcomed the arrival of the agency’s first space-bound Orion spacecraft Monday, marking a major milestone in the construction of the vehicle that will carry astronauts farther into space than ever before.

“Orion’s arrival at Kennedy is an important step in meeting the president’s goal to send humans to an asteroid by 2025 and to Mars in the 2030s,” NASA Deputy Administrator Lori Garver said. “As NASA acquires services for delivery of cargo and crew to the International Space Station and other low-Earth destinations from private companies, NASA can concentrate its efforts on building America’s next generation space exploration system to reach destinations for discovery in deep space. Delivery of the first space-bound Orion, coupled with recent successes in commercial spaceflight, is proof this national strategy is working.”

Orion will be the most advanced spacecraft ever designed. It will provide emergency abort capability, sustain astronauts during space travel and provide safe re-entry from deep space.

The space-bound Orion will launch on Exploration Flight Test-1, an uncrewed mission planned for 2014. The spacecraft will travel 3,600 miles above the Earth’s surface, 15 times farther than the International Space Station’s orbital position. This is farther than any spacecraft designed to carry humans t has gone in more than 40 years. The primary flight objective is to understand Orion’s heat shield performance at speeds generated during a return from deep space.

In advance of the 2014 launch from Cape Canaveral Air Force Station, Fla., a 400-person Orion production team at Kennedy will apply heat shielding thermal protection systems, avionics and other subsystems to the spacecraft. Work also is underway by the Ground Systems Development and Operations team at Kennedy to modify and refurbish facilities used throughout the history of American spaceflight in preparation for the next generation of rockets and spacecraft. This includes the Vehicle Assembly Building, Launch Control Center, launch pad, mobile launcher and crawler-transporter.

“Work is under way on America’s next great spacecraft that will surpass the boundaries within which humanity has been held,” said William Gerstenmaier, associate administrator for the Human Exploration Operations Mission Directorate at NASA Headquarters in Washington. “In a facility that once processed cargo for space shuttles and various components for the International Space Station, hundreds of people at Kennedy are coupling advanced hardware assembly systems with a new human-rated spacecraft designed for deep space travel.. It is a fitting testament to the American work force at Kennedy that has enabled the exploration of space for 50 years is again working on hardware that will extend human presence throughout the solar system.”

In 2017, Orion will be launched by NASA’s Space Launch System (SLS), a heavy-lift rocket that will provide an entirely new capability for human exploration beyond low Earth orbit. Designed to be flexible for launching spacecraft for crew and cargo missions, SLS will enable new missions of exploration and expand human presence across the solar system.

Across the country, progress is being made on multiple components and capabilities for Orion and SLS. Orion has successfully completed numerous splashdown tests from a variety of angles and speeds, examining how the spacecraft will come to a rest on the ocean at the conclusion of deep space missions. NASA also has conducted a series of parachute tests high above the Arizona desert, demonstrating how Orion will behave under its giant parachute canopy. Software tests have been run between Mission Control Houston and an Orion mockup at Lockheed Martin’s Exploration Development Laboratory, allowing flight controllers to learn how the spacecraft’s onboard computers operate. Work also continues to build and fine-tune Orion’s launch abort system. Lockheed Martin is the prime contractor for Orion.

The J-2X upper-stage rocket engine, developed by Pratt & Whitney Rocketdyne for the future two-stage SLS, is being tested at Stennis Space Center in Mississippi. The prime contractor for the five-segment solid rocket boosters, ATK, has begun processing its first SLS hardware components in preparation for an initial qualification test in 2013. The SLS core stage, which will be designed and manufactured by Boeing, has just passed a major technical review and is moving from concept to early design. Boeing has already delivered test bed flight computers to the program and flight software development is underway.