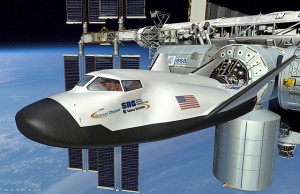 The gear test is an important milestone to prepare for the upcoming approach and landing test of the Dream Chaser Space System later this year. It evaluated the impact the nose landing gear will experience on touchdown in order to ensure a safe runway landing.

SNC is one of seven companies developing commercial crew transportation capabilities to ferry U.S. astronauts to and from low Earth orbit and the International Space Station. The Dream Chaser is the only spacecraft under CCDev2 that is winged and designed to land on a conventional runway. It is designed to carry as many as seven astronauts to space.

“The landing gear system must perform flawlessly, just like the space shuttle orbiter’s did, for the safe return of the crew,” CCP program manager Ed Mango said. “It’s great to see that SNC is building on that experience while developing the Dream Chaser spacecraft.”

SNC tested the spacecraft’s main landing gear in February. This nose landing gear test completes the milestones leading up to the upcoming approach and landing test, which will complete the CCDev2 partnership.

“This test marks a significant point in the development of the Dream Chaser orbital crew vehicle. As the last milestone before free flight of the Dream Chaser spacecraft, we are now preparing for the approach and landing tests to be flown later this year,” said Jim Voss, SNC vice president of space exploration systems and program manager for the Dream Chaser.

All of NASA’s industry partners, including SNC, continue to meet their established milestones in developing commercial crew transportation capabilities under CCDev2.