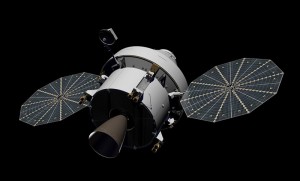 HOUSTON — NASA completed another successful test Wednesday of the Orion crew vehicle’s parachutes high above the Arizona desert in preparation for the spacecraft’s orbital flight test in 2014. Orion will carry astronauts deeper into space than ever before, provide emergency abort capability, sustain the crew during space travel and ensure a safe re-entry and landing.

A C-17 plane dropped a test version of Orion from an altitude of 25,000 feet above the U.S. Army Yuma Proving Ground in southwestern Arizona. This test was the second to use an Orion craft that mimics the full size and shape of the spacecraft.

Orion’s drogue chutes were deployed between 15,000 feet and 20,000 feet, followed by the pilot parachutes, which deployed the main landing parachutes. Orion descended about 25 feet per second, well below its maximum designed touchdown speed, when it landed on the desert floor.

“Across the country, NASA and industry are moving forward on the most advanced spacecraft ever designed, conducting drop and splashdown tests, preparing ground systems, designing software and computers and paving the way for the future of exploration,” said William Gerstenmaier, associate administrator for the Human Exploration and Operations Mission Directorate at NASA Headquarters in Washington. “Today’s parachute test in Yuma is an important reminder of the progress being made on Orion and its ultimate mission — enabling NASA to meet the goal of sending humans to an asteroid and Mars.”
Orion parachutes have so-called reefing lines, which when cut by a pyrotechnic device, allow the parachute to open gradually, managing the initial amount of drag and force on the parachute. The main objective of the latest drop test was to determine how the entire system would respond if one of the reefing lines was cut prematurely, causing the three main parachutes to inflate too quickly.

Since 2007, the Orion program has conducted a vigorous parachute air and ground test program and provided the chutes for NASA’s successful pad abort test in 2010. All of the tests build an understanding of the chutes’ technical performance for eventual human-rated certification.

In 2014, an uncrewed Orion spacecraft will launch from Cape Canaveral Air Force Station in Florida on Exploration Flight Test-1. The spacecraft will travel 3,600 miles above Earth’s surface. This is 15 times farther than the International Space Station’s orbit and farther than any spacecraft designed to carry humans has gone in more than 40 years. The main flight objective is to understand Orion’s heat shield performance at speeds generated during a return from deep space.

In 2017, Orion will be launched by NASA’s Space Launch System (SLS), a heavy-lift rocket that will provide an entirely new capability for human exploration beyond low Earth orbit. Designed to be flexible for launching spacecraft for crew and cargo missions, SLS will enable new missions of exploration and expand human presence across the solar system.

One thought on “NASA Completes Another Successful Orion Parachute Test”