Japan Robotic Cargo Ship to dock with the Space Station 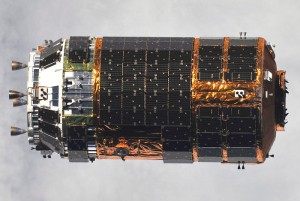 Japan is launching a new unmanned cargo spaseship that will be delivering goods to the international space station.

The Spaceship called H-2 Transfer Vehicle-3, or HTV-3 for short, is the third of its kind to travel to the ISS. HTV-3 is set to blast off at 10:06 pm EDT from the Tanegashima Space Center in southern Japan. The space craft will be be on top of  a Japanese H-2b rocket.

At the point where the spacecraft is about 40 feet away from the ISS, astronauts Joe Acabe of NASA, and Aki Hoshide of JAXA, the Japanese Aerospace Exploration Agency, will attach the craft to the Earth-facing docking port, this is set to happen around 7 a.m. EDT July 27.

HTV-3 is going to be carrying 4 tons of supplies and hardware. This includes the winning science experiments designed by teen students in the youtube space lab competition. It is also  carrying the new ISERV camera system (International Space Station SERVIR Environmental Research and Visualization System), witch is designed to observe earth.

We will be able to direct the camera to observe sites on the earth to analyze and study the planet’s environment.