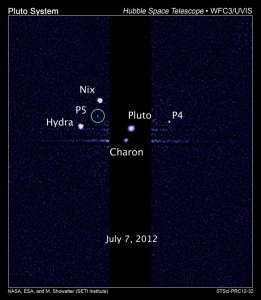 Using NASA”s Hubble Space Telescope, Researchers for the new moon. This brings the number of known moons to five.

Stern is the principal investigator of NASA’s New Horizons Spacecraft, Witch will be Flying by Pluto in 2015. This is the first mission to ever visit the dwarf planet.

Pluto has four other moons, Charon, Nix, Hydra and P4. Charon is the largest at 648 miles across. Nix and Hydra both range between 20 and 70 miles wide, and P4 is thought to be between 8 and 21 miles wide.

The new moon is smaller then P4. It was been provisionally named S/2012 (134340) 1, although is being called P5. It was Discovered using the Wide Field Camera 3 on the Hubble Space Telescope in late June and early July.

P5 is irregularly shaped, and has a diameter between 6 and 15 miles. Its average distance is 29,000 miles.