The world’s Largest Telescope Project Is A Go. 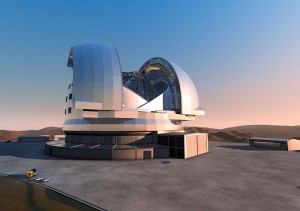 Plans for the mega-telescope named European Extremely Large telescope, or E-ELT, Has taken a large step closer to becoming reality Monday, June 11th. The Plans were approved by the governing council of the European Southern Observatory (ESO), officials announced Monday.

The European Extremely Large telescope, or E-ELT, will be a 129 foot segmented-mirror telescope. It will be on top of a mountain called Cerro Armazones located in northern Chile.

The telescope will collect at least 12 times more light then today’s best optical telescopes. This will allow astronomers to look at and possibly answer a variety of high-priority cosmic questions.

The project is estimated to cost 1.083 billion euros, or about $1.35 billion dollars. The telescope is going to begin construction this year, with it being operational in the early 2020s.