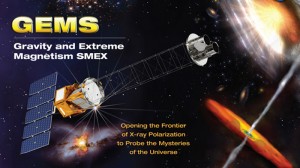 NASA is canceling work on the space telescope designed to find black holes through x-ray light. The decision has come from the rising cost of the project, the space agency says.

“The GEMS project was initiated under a very well-defined cost cap. As they approached their confirmation review, it was clear they would not be able to complete it within their cost cap. NASA made the very difficult decision not to confirm GEMS into the implementation phase.” Hertz said.

The Team working on the project has nearly completed the design stage of the project, and almost ready to start on the hardwhere side of the mission.

The project was set at a firm cost limit of $105 million, not including the cost of launch. After NASA commissioned a indepented review of GEMS budget, they found that it would likely be 20 to 30 percent over budget.

NASA will now have to pay $13 million in close-out cost to cancel the mission, including contract cancelation fees to Orbital Sciences Corp. along with other companies that were hired to build the spacecraft.

GEMS was going to use three telescopes to capture the bent x-ray light from objects such as black holes, and stars.

The main factor behind the cost overrun was the trickiness of developing the technology needed for the mission, Hertz said.