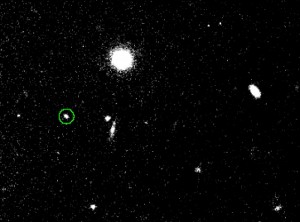 “It was exciting to realize that this [S/2010 J 2] is the smallest moon in the solar system that was discovered and tracked from Earth,” said co-author Mark Alexandersen, of the University of British Columbia, in a statement.

Jupiter is surrounded by 50 main moon that have names, and at least 14 smaller provisional moons that are known only by their numbers.