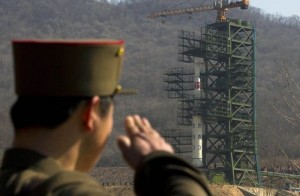 South Korea has confirmed that North Korea defiantly fired off a long-range rocket Friday, an official said, in a move sure to spark strong international condemnations and escalate regional tensions. South Korean defense ministry spokesman Kim Min-seok told reporters in a nationally televised news conference that the rocket was fired at 7:39 a.m.  It was launched from the Sohae Satellite Launching Station in the northern part of the country, near its border with China. “We’re now tracking the flight path,” an official said on condition of anonymity.The Unha-3 rocket is officially a satellite-delivery vehicle but has observers eyeing the rocket’s potential to carry another payload: nuclear weapons.

About 90 seconds into flight when its first stage should have burned out and second stage started, the rocket flared brightly and apparently exploded, U.S. and South Korean defense officials said. Debris fell into ocean near South Korea’s Jeju Island. The U.S. said earlier this week there were Naval assets in the area to monitor and track the rocket after launch. Those same assets could be used to pick up the pieces.

Japan’s Defense Minister Naoki Tanaka said, “We have confirmed that a certain flying object has been launched and fell after flying for just over a minute.” He did not say what exactly was launched. Parts fell into water near South Korea’s Jeju Island, South Korean media reported. “A few minutes after the launch, the rocket disintegrated into several pieces and lost its altitude,” Defence Ministry spokesman Kim Min-seok told journalists. The 90-ton rocket launched and there was a larger than anticipated flare. This is North Korea’s second consecutive failure to get a satellite into orbit, although it claimed success with a 2009 launch.  Japan had stated it would shoot down the rocket if it was launched

North Korea had said it will launch its Unha-3 rocket between April 12-16 to put what it claims is a satellite into orbit to mark the 100th birthday of Kim Il-sung, the country’s late founder and grandfather of current leader Kim Jong-un. South Korea, the United States and other regional powers have urged Pyongyang to call off the launch, seeing it as a pretext to disguise a long-range missile test banned under a U.N. Security Council resolution.