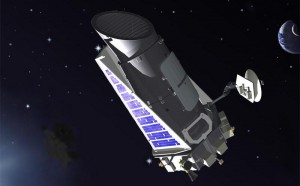 MOFFETT FIELD, Calif. — NASA’s Kepler mission has been approved for extension through fiscal year 2016 based on a recommendation from the Agency’s Senior Review of its operating missions.. The extension provides four additional years to find Earth-size planets in the habitable zone — the region in a planetary system where liquid water could exist on the surface of an orbiting planet – around sun-like stars in our galaxy. The 2012 Senior Review report is available at:

“Kepler has revolutionized our understanding of exoplanets and the study of stellar seismology and variability,” said Roger Hunter, Kepler project manager at NASA Ames Research Center, Moffett Field, Calif. “There is currently no other mission in development that can replace or surpass the precision of Kepler. This extended mission will afford Kepler a unique opportunity to rewrite our understanding of the galaxy and our place in it.”

Launched in March 2009, the Kepler spacecraft identifies planet candidates by repeatedly measuring the tiny change in brightness of more than 150,000 stars to detect when a planet transits the face of the star. The size of the planet can be derived from these periodic dips in brightness. At least three transits are required to verify a signal as a planet.

“Kepler offers a new technical capability, opening a new measurement parameter space, and as often happens with such developments, that has led to unexpected results…. There has been a continuous stream of new findings – the assimilation and exploitation of new opportunities is just beginning,” as stated by the committee in the 2012 Senior Review report.

The mission’s discoveries beyond our solar system include the first unquestionably rocky planet; the first multiple-transiting planet system; the first small planet in the habitable zone; the first Earth-size planets; the smallest Mars-size planets; and the confirmation of a new class of double-star planetary systems.

Ball Aerospace and Technologies Corp. in Boulder, Colo., developed the Kepler flight system and supports mission operations with the Laboratory for Atmospheric and Space Physics at the University of Colorado in Boulder.

For more information about the Kepler mission, visit: