Northeast Coast of U.S. to get rare opportunity to see rocket launch 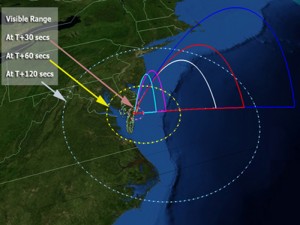 03.20.12 – NASA managers have given a “go” for a countdown leading to the launch of five suborbital sounding rockets just after midnight tonight on a science mission that will briefly create a milky white cloud that may be visible along a large portion of the U.S. east coast.

WALLOPS ISLAND, VA – NASA is scheduled to launch five suborbital sounding rockets in just over five minutes March 15 from the Wallops Facility in Virginia as part of a study of the upper level jet stream.

You can watch the launches live at this link.

Based on the approved range schedule, the launch window for March 15 is between midnight and 1:30 a.m. EDT. The backup launch days are March 16 through April 3. The Anomalous Transport Rocket Experiment (ATREX) will gather information needed to better understand the process responsible for the high-altitude jet stream located 60 to 65 miles above the surface of the Earth.

As part the mission, the five rockets will release a chemical tracer that will form milky, white clouds that allow scientists and the public to “see” the winds in space. These clouds may be visible for up to 20 minutes by residents from South Carolina to southern New Hampshire and Vermont.

The rockets are being used to study these high-altitude winds and their intimate connection to the complicated electrical current patterns that surround Earth. First noticed in the 1960s, the winds in this jet stream shouldn’t be confused with the lower jet stream located around 30,000 feet, through which passenger jets fly and which is reported in weather forecasts. This rocket experiment is designed to gain a better understanding of the high-altitude winds and help scientists better model the electromagnetic regions of space that can damage man-made satellites and disrupt communications systems. The experiment will also help explain how the effects of atmospheric disturbances in one part of the globe can be transported to other parts of the globe in a mere day or two.

The rockets will be launched on a clear night within a period of minutes, so the trails can all be seen at the same time. The trimethyl aluminum will then be released in space out over the Atlantic Ocean at altitudes from 50 to 90 miles. The cloud tracers will last for up to 20 minutes and will be visible in the mid-Atlantic region, and along the east coast of the United States from parts of South Carolina to New Jersey.