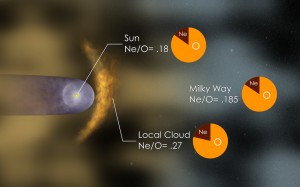 NASA – NASA’s Interstellar Boundary Explorer , known as IBEX for short, methodically measures samples of the mysterious neighborhood beyond our home. IBEX scans the entire sky once a year, and every February, its instruments point in the correct direction to intercept incoming neutral atoms. IBEX counted those atoms in 2009 and 2010 and has now captured the best and most complete glimpse of the material that lies so far outside our own system. It has seen that the Galactic wind does not look like the solar wind made by our own sun.

“We’ve directly measured four separate types of atoms from interstellar space and the composition just doesn’t match up with what we see in the solar system,” says Eric Christian, mission scientist for IBEX at NASA’s Goddard Space Flight Center in Greenbelt, Md. “IBEX’s observations shed a whole new light on the mysterious zone where the solar system ends and interstellar space begins.” 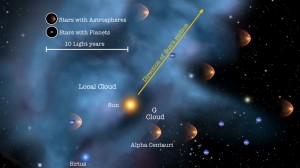 Only over the last 15 years, we have been able to detect the first astrospheres and planets around other stars (exoplanets). Here we show a zoom into the most immediate environment around the Sun, our cosmic neighborhood.Credit: NASA/GSFC/Adler/U. Chicago/Wesleyan

“Our solar system is different than the space right outside it and that suggests two possibilities,” says David McComas the principal investigator for IBEX at the Southwest Research Institute in San Antonio, Texas. “Either the solar system evolved in a separate, more oxygen-rich part of the galaxy than where we currently reside or a great deal of critical, life-giving oxygen lies trapped in interstellar dust grains or ices, unable to move freely throughout space.”

These IBEX measurements also provide information about the cloud of material in which the solar system currently resides. This cloud is called the local interstellar cloud, to differentiate it from the myriad of particle clouds throughout the Milky Way, each traveling at different speeds. The solar system and its heliosphere moved into our local cloud at some point during the last 45,000 years.

“This set of papers provide many of the first direct measurements of the interstellar medium around us,” says McComas. “We’ve been trying to understand our galaxy for a long time, and with all of these observations together, we are taking a major step forward in knowing what the local part of the galaxy is like.”