Portrait of a Doomed Asteroid

Source NASA – A new study provides a possible explanation of mysterious X-ray flares detected by the Chandra K-ray Observatory for several years in the region of Sagittarius A*, or Sgr A*. The study suggests a cloud around Sgr A*, a supermassive black hole at the center of our Milky Way Galaxy, which contains hundreds of trillions of asteroids and comets that have been stripped from their parent stars.

The flares occur when asteroids of six miles or larger in radius are consumed by the black hole. An asteroid that undergoes a close encounter with another object, such as a star or planet, can be thrown into an orbit headed towards Sgr A*. If the asteroid passes within about 100 million miles of the black hole, roughly the distance between the Earth and the sun, it is torn into pieces by the tidal forces from the black hole. These fragments would then be vaporized by friction as they pass through the hot, thin gas flowing onto Sgr A*, similar to a meteor heating up and glowing as it falls through Earth’s atmosphere. A flare is produced and eventually the remains of the asteroid are swallowed by the black hole. 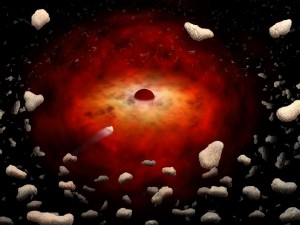 One thought on “Portrait of a Doomed Asteroid”