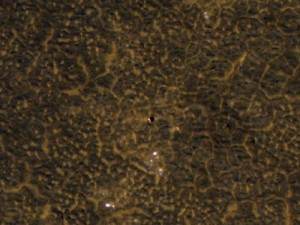 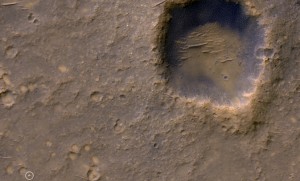 Near the lower left corner of this view is the three-petal lander platform that NASA's Mars Exploration Rover Spirit drove off in January 2004. The lander is still bright, but with a reddish color, probably due to accumulation of Martian dust. Image credit: NASA/JPL

The High Resolution Imaging Science Experiment (HiRISE) camera on NASA’s Mars Reconnaissance Orbiter also recorded a pictures on Jan. 29, 2012, that includes the first color image from orbit showing the three-petal lander of NASA’s Mars Exploration Rover Spirit mission. Spirit drove off that lander platform in January 2004 and spent most of its six-year working life in a range of hills about two miles to the east.

The Mars Reconnaissance Orbiter has been examining Mars with six science instruments since 2006. Now in an extended mission, the orbiter continues to provide insights into the planet’s ancient environments and how processes such as wind, meteorite impacts and seasonal frosts are continuing to affect the Martian surface today. This mission has returned more data about Mars than all other orbital and surface missions combined.