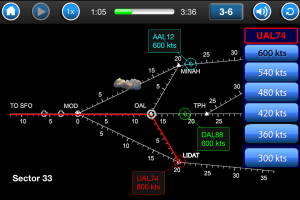 WASHINGTON — NASA has released a new educational game with an air traffic control theme for Apple iPhone and iPad devices. The Sector 33 application is designed to challenge students in middle school and above to use basic math and problem-solving skills.

The application may be downloaded free of charge at:

An Android version of the app is in development and will be made available in the Android Marketplace in the coming months.

In the game the player acts as an air traffic controller guiding airplanes through a sector of airspace spanning Nevada and California. The player can adjust the planes’ path and speed to safely reach certain spots in the sky in the fastest time possible while keeping the planes a specific distance from each other.

“Our hope is that Sector 33 will give students a sense of the importance of math in managing our nation’s air traffic and, at the same time, interest them in pursuing a career in aeronautics,” said Jaiwon Shin, NASA’s associate administrator for aeronautics research in Washington.

The math-focused game also aligns with the NASA Office of Education’s mission to engage students in activities related to science, technology, engineering and mathematics.

“Today’s students respond positively to experiential learning,” said Leland Melvin, NASA’s associate administrator for education. “Using an interactive game to spark their interest, while at the same time teaching them fundamental math concepts, is a win-win scenario. It is a perfect way to help cultivate the next generation of engineers and technologists.”

Sector 33 is based on Smart Skies Line Up With Math, an educational software title developed under the direction of NASA’s Aeronautics Research Mission Directorate and distributed in cooperation with the Federal Aviation Administration and National Air Traffic Controllers Association. Smart Skies has been used in middle school classrooms across the United States since 2005.